Legal Update: The overall reform of the execution law – GREx

The overall reform of the execution law (GREx) came into force on 01.07.2021. It provides for a number of changes, in particular with regard to the execution options relating to movable assets. The amendment will be applicable to execution applications received by the court after 30.06.2021.

1. Simple execution package according to § 19 EO

2. Extended execution package according to § 20 EO

The extended execution package includes, in addition to the simple package, all other types of execution on movable assets. However, execution on immovable assets (such as real estate) must be applied for separately, as was previously the case. Within the framework of the extended execution package, an administrator is now appointed officially, who is responsible for identifying the assets, selecting suitable objects and carrying out the proceedings, including realization. The downside, however, is the costs to be borne by the creditor. The administrator shall be appointed by the court only after the creditor has paid an advance on costs to cover the minimum remuneration of the administrator. Since the minimum remuneration of the administrator amounts to EUR 500.00, it is to be assumed that at least this amount will also be prescribed by the court as an advance on costs. Any further remuneration of the administrator shall be calculated on the basis of the gross proceeds obtained in the course of the liquidation; in this respect, the creditor making the request for payment does not have to make any advance payments.

If the claim to be collected does not exceed EUR 10,000.00, the granting of the extended execution package requires that the execution on movable assets within the framework of a simple execution package has remained unsuccessful (§ 20 (2) EO); this is to be assumed if no attachable objects were found during an execution attempt and further execution attempts are not promising (§ 252e (3) EO). Whether the extended execution package can be applied for immediately in the case of a claim in excess of EUR 10,000.00 can currently be inferred neither from the law nor from the explanatory notes. However, this could be assumed in reverse.

If the debtor has several creditors and an extended execution package has already been granted in favor of one creditor, the following creditors shall join the proceedings in the usual manner.

3. Interface between execution and insolvency law

A new feature is the further interface between execution and insolvency law pursuant to § 49a EO. If, in the course of the determination of the assets, it becomes apparent during the execution proceedings that the debtor is manifestly insolvent, the executing body or the administrator shall immediately stop the execution and the execution court may subsequently determine the insolvency by way of a resolution. This circumstance shall then also be publicly announced in the insolvency file, thus creating an easily accessible and transparent source of information for everyone on the one hand and enabling a quick and easy transition to insolvency proceedings on the other.

The total execution proceedings (“Gesamtvollstreckung”) shall be terminated as soon as the debtor applies for the acceptance of a reorganization plan or payment plan or for the initiation of proceedings for a levy on income. This is intended to exert a certain pressure on the petitioning creditor to file for insolvency. Furthermore, it is intended to avoid futile and cost-intensive attempts at execution due to the debtor’s obvious inability to pay.

Overall, the amendment to execution law is intended to increase the efficiency of execution proceedings for the collection of claims and reduce the number of execution applications. Another important objective of the reform package concerns, among other things, the interfaces between execution and insolvency law.

If you have any questions, please contact us:
Georg Rupprecht
Sezen Koc


If you would like to receive future issues of need2know follow us on LinkedIn or please send an email to subscribe@bpv-huegel.com. 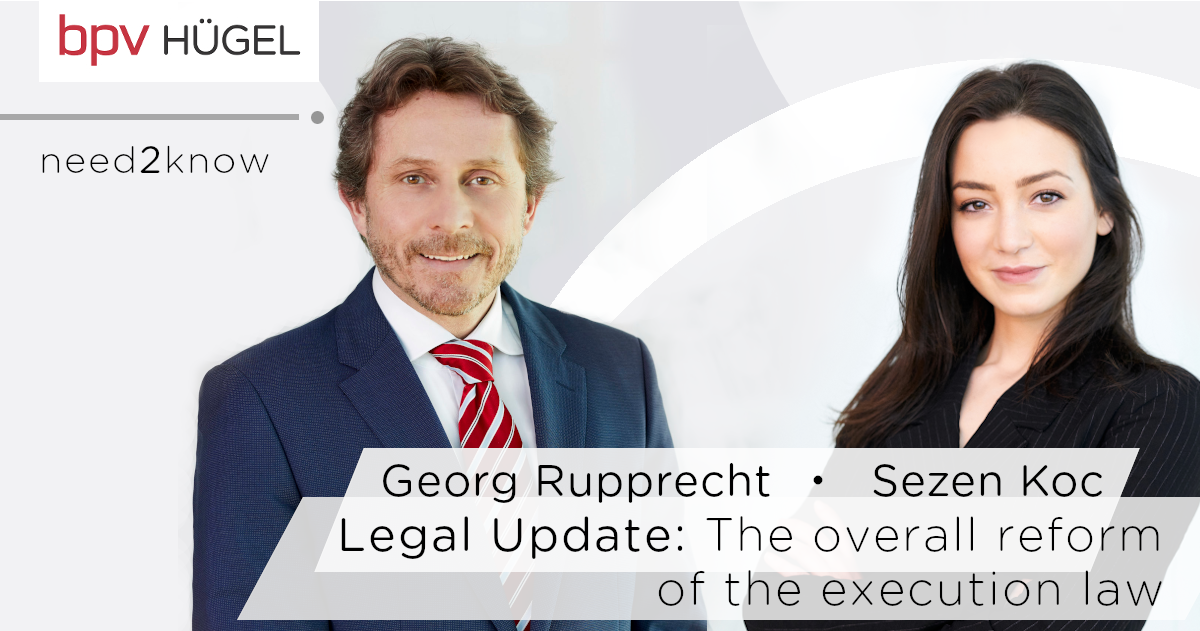