In its decision dated 25.11.2020, 6 Ob 203/20a, the Austrian Supreme Court confirmed the admissibility of an up-stream merger of two over-indebted subsidiaries into their parent company. A positive market value of the assets of the transferring subsidiaries is not required if, to put it briefly, the acquiring parent company can afford it. The decision creates legal clarity for mergers of over-indebted subsidiaries. This is particularly important in the current difficult economic times caused by the Corona-crisis.

The Commercial Register Court refused to register the merger of the two over-indebted subsidiaries: Only a company with a positive market value could be merged. The transfer of a not merely insignificant negative asset in the up-stream merger can worsen the position of creditors of the acquiring parent company. The court of appeal confirmed the decision. The parent company brought the proceedings before the Austrian Supreme Court.

In another decision on a merger of sister companies (OGH 26.06.2003, 6 Ob 70/03t), the Supreme Court ruled that a merger was inadmissible if the merged company was overindebted, i.e. if the merger would result in a company that is close to insolvency.

In decisions on the conversion of a limited liability company (Ltd.) into a limited partnership (OGH 07.11.2007, 6 Ob 235/07p and 6 Ob 236/07k), the Supreme Court stated that a reorganization does not necessarily have to lead to an improvement in the situation of the creditors. There is no general principle in reorganization law that over-indebted companies cannot be transferred or contributed or that the transferring company must have a positive value.

In the current decision, the Supreme Court first undertook a tour d’horizon through previous case law and literature. According to the prevailing opinion in the literature, in the case of an up-stream merger, the assets of the transferring subsidiary may be negative, provided that (i) the parent company is able to cover the (due) liabilities of all creditors (i.e. of both the transferring and the acquiring company) after the merger and (ii) does not itself become insolvent by taking over the negative assets. Moreover, the merger of a transferring company which is not only over-indebted in accounting terms is also permissible, if the acquiring company is significantly larger and has sufficient creditworthiness, in particular if the liabilities assumed are already covered by untied reserves or a profit carried forward of the acquiring company.

The Supreme Court fully agreed with the prevailing opinion in the literature and declared the merger permissible:

The merger of two subsidiaries that are not merely over-indebted in accounting terms into their parent company, which is significantly larger and has sufficient creditworthiness, is permissible, in particular because (i) the negative equity of the subsidiaries is covered by the untied capital reserve and the net profit at the acquiring parent company and (ii) the acquiring parent company will not become over-indebted in accounting terms after the merger and (iii) there are no indications of an insolvency situation pursuant to Sec. 66 f of the Austrian Insolvency Act.

It is therefore not mandatory to first have the over-indebted subsidiary remediated by the parent company in order to then be allowed to merge it up-stream. This is because the same result is achieved if the subsidiary with negative assets – as in this case – is immediately merged into its (positive) parent company.

The Supreme Court further confirmed the case law of the Vienna Higher Regional Court (OLG Wien 28 R 111/04f; 28 R 112/04b), according to which the question of positive market value or over-indebtedness is not based on book value but on actual value.

The current decision is to be welcomed. The Supreme Court has confirmed the already “established“ practice and eliminated doubts about the fundamental admissibility of up-stream mergers of over-indebted subsidiaries. The COVID-19 crisis will increasingly lead to corporate crises. Legal clarity on remediation mergers (Sanierungsverschmelzungen) came therefore at exactly the right time.

However, the following should be emphasized: the parent company was highly profitable and could clearly afford to take over the two (negative) subsidiaries. It is therefore open whether the Supreme Court would decide differently if the circumstances were not so clear. The decision does not contain any statements on this.

The decisive point will be – also in borderline cases – the economic situation of the acquiring parent company after the merger, since it is relevant and decisive for any threat/risk to creditors. In particular, it will be decisive, that the merger does not endanger the existence of the company resulting from the merger and that it does not exceed its economic capacity. Otherwise, the up-stream merger is immoral and inadmissible because, in the case of an insolvent acquiring company, the creditors would have to compete with each other for a liability fund which is not sufficient to satisfy all creditors in full.

In summary, the following criteria must be observed in any case for up-stream remediation mergers (Sanierungsverschmelzungen): 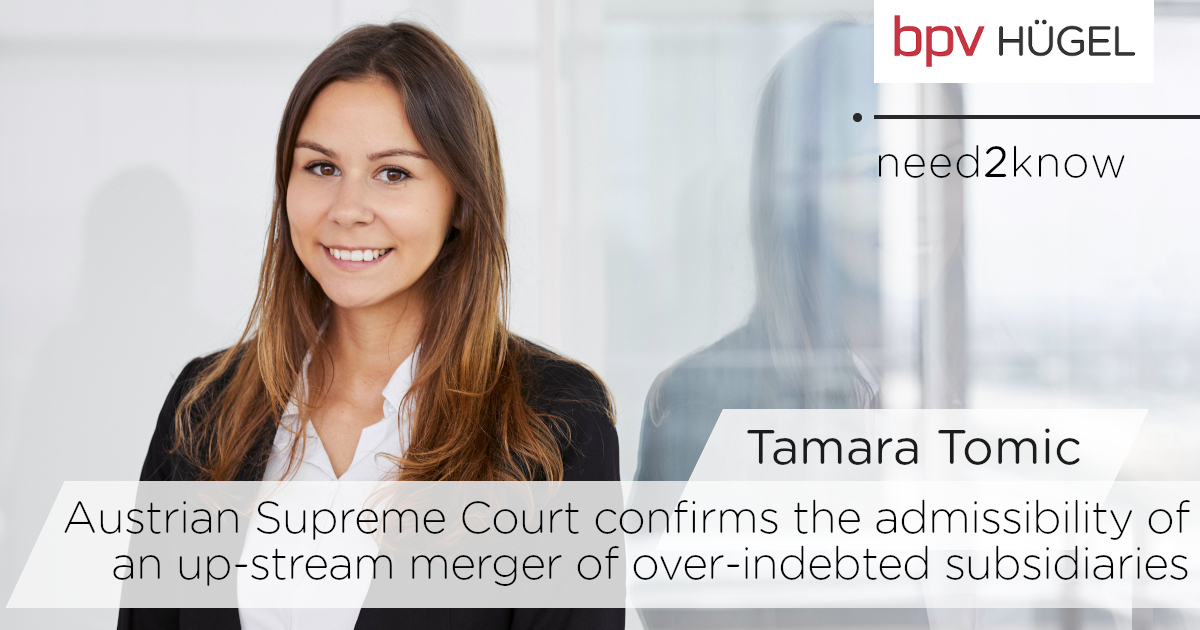