More relevant than ever again from tomorrow: Theses of the judgement to the rent reduction because of COVID-19 for commercial real estate

As a result of the initial restrictions, including officially decreed business closures from March this year, the question arose for a large number of tenants and landlords as to whether tenants who were no longer able to carry out their business operations due to the lockdown were still obliged to pay rent.

In the case of a Viennese hairdresser, the Meidling District Court, as the first instance, now denied an obligation to pay rent for the period of the lockdown.

In the case in question, the defendant hairdresser paid no rent in April 2020, but did pay operating costs. The hairdresser justified this with Sec 1096 and 1104 ABGB (Austrian Civil Code), which allow a rent exemption in the case of an “extraordinary coincidence” such as an “epidemic“. The Covid-19 pandemic would have to be classified in the opinion of the hairdresser as such a disease, which leads to an unusability of the renting object and thus to the renting fee exemption. The landlord objected and sued the hairdresser for payment of the rent including eviction due to the unpaid rent instalments. The landlord failed in the Meidling District Court as first instance with the action for eviction.

At the outset, the court stated that the corona pandemic was in principle an epidemic and therefore had to be subsumed under Sec 1104 ABGB. The court rejected thus the objection of the plaintiff that it concerns thereby a risk from the sphere of the hairdresser or a general life risk which can be carried by it.

According to Sec 1104 ABGB, a reduction of interest would not only occur if the inventory item itself is defective, but also if the inventory taker is prevented from using it in accordance with the contract for reasons outside his sphere. It is not based on the absolute impossibility of use, but on the impossibility of use for the intended use. Therefore, the contractually stipulated purpose of use of the rented object would be essential (here very limited: only “hairdressing salon”). For the existence of an obligation to pay rent, it is therefore essential that the business activity corresponding to the agreed business purpose would at least partly be possible without direct customer contact in the sales rooms. However, this was not the case in the present case, as no business activity was possible due to the closure by the authorities. To the objection of the plaintiff that the business premises served further for storage, the court explained that this was irrelevant. The mere fact that the tenant also used the premises for the storage of goods was not sufficient if the actual business activity for which the storage was intended was made completely impossible by spatial restrictions. The storage of goods was only to be considered if the storage was typically required for the actual business purpose as a salesroom. This is currently not the case with a hairdresser. Although individual products are usually exhibited, there is no storage beyond that.

Also the argument of the plaintiff that customers would not have entered the business premises for fear anyway was rejected, since it only depends on whether the business premises can be used for the intended purpose. It was also irrelevant what turnover the defendant party had in the following months: especially in the hairdressing business, a catch-up effect was impossible because a visit to a hairdresser, even if it was later than originally planned, could still only take place this one time; nobody would go to the hairdresser again after a short time so that they could keep to their usual number of visits. This regardless of how large the hair growth described by the plaintiff as “optical neglect” would turn out.

Despite quite detailed reasons given by the Meidling District Court, the complex of issues surrounding rent exemptions and rent reductions in connection with the Covid 19 pandemic has not been conclusively clarified. On the one hand, this is merely a first-instance decision that has not yet been confirmed by the highest court. On the other hand, the decision only deals with the special case of a hairdresser whose situation and interests cannot easily be compared with other industries.

This applies, for example, in connection with a storage activity: In the case of the hairdresser, a crediting of the storage possibility at the hairdresser’s expense was denied. However, it is questionable whether this is also the case in commercial transactions, where the storage of goods is of much greater importance than in the case of a hairdresser. In this case the court did not establish clear criteria under which circumstances storage at the expense of the lessee would have to be taken into account.

The question also remains unsettled as to what extent the exercise of online trading from the business premises affects the possibility of a rent reduction or a loss of rent (a concrete assertion was not made in this regard, which is why it was not discussed further).

Accordingly, the interpretation of the rental contract always ultimately determines the purpose for which the leased property was rented (contractual purpose). Only the “reserved holding” alone does not justify the obligation to pay rent in the opinion of the Meidling District Court. Tenants of rental properties where only customer contact has been restricted by the Covid measures, but where office activities remain possible, will probably not benefit from a (complete) exemption from rent. According to the Meidling District Court’s ruling, the contractually stipulated purpose of use is the key factor – the decisive factor is that the business activity corresponding to the agreed business purpose was at least partially possible without direct customer contact in the sales rooms. Nor did the shop window in the specific case contribute to further business activity (attracting customers, advertising etc.) – this could of course be different in other cases.

Furthermore, it should be noted that the rental agreement to be judged by the Meidling District Court did not contain any special provisions regarding Sec 1104 ABGB.

Sec 1104 ABGB is of a dispositive nature, which means that the parties can agree on other arrangements. If the landlord had included a clause in his lease agreement according to which the tenant would also be liable for the rent in the event of unusability due to an epidemic, the tenant would probably still have been obliged to pay rent.

The Meidling District Court affirmed the applicability in principle of Sec 1104 ABGB, because COVID-19 is a “disease” in the sense of the law and was the cause for the so-called lockdown. Since a hairdresser could no longer use the business premises in April for the operation of the hairdresser’s store due to the lockdown, and since it was also not possible for the hairdresser to use the rented object for other purposes (very narrow contractual purpose of use around a specific case), there was a claim for the loss of the rent according to Sec 1104 ABGB.

Attention: A general claim for renting loss according to Sec 1104 ABGB because of COVID-19 cannot be derived from this judgement yet. Whether a tenant is obligated despite COVID-19 to the payment of the rent, depends always on the agreed upon rent purpose and the risk distribution-specific special regulations. This is always an individual case decision and requires an exact legal examination of the lease. 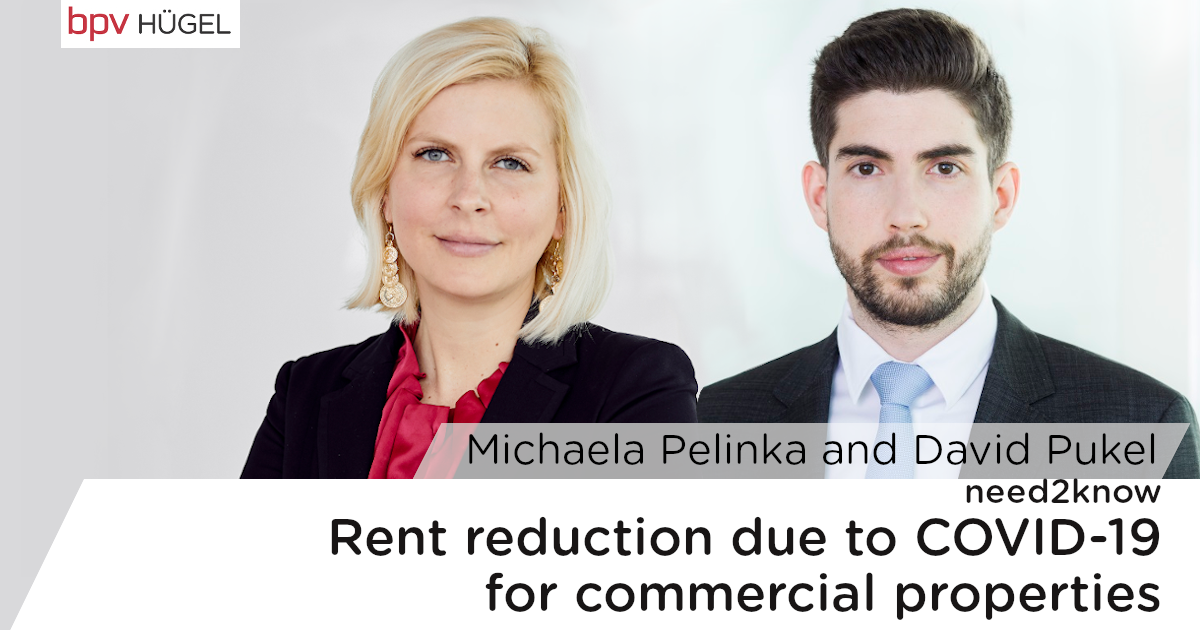