Direct investments from third countries are increasingly viewed critically. Politically the “sell-out” of technology is feared.

On 25 July 2020, the Federal Act on the Control of Foreign Direct Investments (“Investment Control Act – ICA“) came into force.

The Covid-19 crisis has accelerated the legislative process and intensified its content. It is feared that economically weakened companies could more easily become the target of hostile takeovers by foreign investors. In addition, the ICA supplements the EU-FDI-Screening Regulation (EU) 2019/452, which provides for a coordinated European investment control process. This EU-Regulation has also reinforced the trend towards stricter national investment controls.

What exactly does the Investment Control Act change? What are the effects on corporate transactions?

Prior to the ICA, the control of foreign direct investments was regulated in Section 25a of the Foreign Trade and Payments Act 2011. Investments in Austrian target companies by third country acquirers were subject to approval only in limited situations: Just a few security-relevant areas were affected. The threshold was generally 25%. Only a direct acquisition of shares was subject to approval, but no indirect acquisition (e.g. via a European intermediate holding company) or asset deals.

The ICA replaces Section 25a of the Foreign Trade and Payments Act 2011. The investment control regime will be considerably tightened and more broadly applied.

What is a direct investment that is subject to approval?

The ICA therefore also requires approval for indirect acquisitions and for asset deals in which the company or significant individual assets of the company are acquired rather than shares in the company.

Micro-enterprises and start-ups with fewer than ten employees and an annual turnover or annual balance sheet total of less than two million euros are exempt from the approval requirement (Section 2 (2) ICA).

Which security-relevant areas are affected?

The Austrian target must be active in a security-relevant area in which takeovers could endanger security or public order.

The security-relevant areas are broader defined and further specified. Areas that were previously not subject to an approval (e.g. critical infrastructures and technologies) are now included.

Acquisition of shares is only subject to approval if a minimum share of the voting rights as defined in Section 4 ICA (so-called “voting rights threshold”) in an Austrian target company is reached or exceeded.

In the case of research and development of drugs and medical products, the reduction of the minimum threshold from 25% to 10% is limited until December 31, 2022.

How does the approval procedure work?

The application must be filed at the latest at or immediately after the conclusion of the legal transaction (signing). Pursuant to Section 6 (1) ICA, the acquiring party is still required to submit an application for approval.

New on the one hand is that the competent authority must inform the target company of such an application. On the other hand, the Austrian target company has a fall-back obligation to notify the competent authority if it is aware of an intended acquisition process that requires approval and it has not been provided with information on an application for approval.  If the target company fails to comply with this notification obligation, an administrative penalty of up to EUR 40,000 – depending on the degree of fault – may be imposed.

In addition, the competent authority (Federal Minister of Digitalization and Business) is entitled to initiate an approval procedure ex officio.

The transaction shall not be approved, if the direct investment may lead to a threat to security or public order whereby any effects of such investment in the areas listed in the annex shall be examined (Section 3 ICA). In addition, the following shall be taken into account:

Within one month after the expiry of all EU consultation periods as defined in Section 12 (5) ICA (i.e. 35 or 40 days after the notification to the European Commission), the Federal Minister for Digitalization and Business either

If neither a notice nor a notification is received within the one-month period, the approval is deemed to have been granted.

Within two months of notification of the initiation of an in-depth investigation procedure, either

If the two-month period expires without prohibition (or approval of the transaction with conditions), the approval is again deemed to have been granted.

A clearance certificate for a certain acquisition may be obtained in advance (Section 9 ICA). By this means it can be clarified upfront whether a transaction is subject to any approval requirement under the ICA.

When does the new ICA apply?

If you have any questions, please contact us:
Christoph Nauer
Thomas Lettau
Elke Napokoj
Tamara Tomic 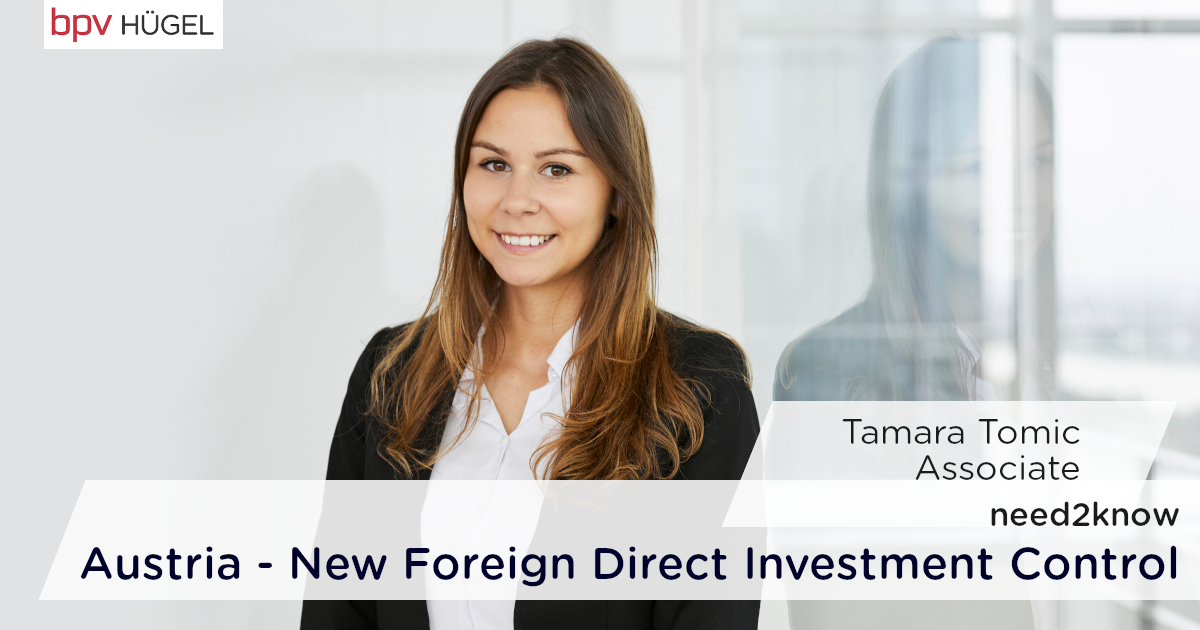