With the 2nd COVID-19 Act passed on 20.03.2020, the National Council amended the rather unknown provision of Section 69 (2a) IO to include the phrase “epidemic, pandemic”. This means that even in the event of an epidemic or pandemic, as is currently the case, the period for filing for insolvency proceedings is now 120 days. Previously, this only applied to natural disasters.

This article deals with the question of whether this change can fulfill the desired purpose, namely to prevent entrepreneurs from filing for insolvency in a hurry.

(2) If the requirements for the opening of insolvency proceedings (sections 66 and 67) are met, such request shall be made without undue delay, but no later than sixty days after the occurrence of illiquidity. The request shall not be deemed culpably delayed if the opening of reorganisation proceedings with self-administration has been carefully pursued.

From now on, the period of 120 days referred to in § 69 para. 2a IO – as already mentioned at the beginning – also applies in the event of an epidemic or pandemic. However, the provisions in paragraph 2 remain unchanged, according to which the time limit only applies if the debtor proceeds “without undue delay” and “the opening of restructuring proceedings with own management has been carefully pursued”.

In order to be able to assess whether over-indebtedness as relevant under insolvency law exists and whether the managing director/board of directors is therefore obliged to file an insolvency petition, a prognosis of continued existence must be prepared in the case of arithmetical over-indebtedness.

The object of the survival prognosis is the assessment of the future solvency of the company within the primary planning period (primary forecast) and the survivability of the company beyond this period (secondary forecast). The scope of a going concern prognosis depends primarily on the specific features of the respective company. The size of the enterprise (or group of enterprises), the number of employees, the sum total of working capital, and the income and expenditure generated and incurred have a strong influence on the number of parameters to be considered in such a forecast.

In a primary forecast, the maintenance of solvency for the near future must be demonstrated in a credible manner, i.e. with a predominant probability.

In addition, a prognosis of continued existence must be based on the requirement that a secondary objective be met. It must be possible to credibly demonstrate that the planned measures are likely to lead to a “turnaround” or a positive development in the longer term and that the ability to pay and viability can be maintained. If this cannot be achieved for a period of two to three years, it must be shown which other or additional measures are likely to satisfy all creditors with at least a predominant probability. (Guideline on Continuity Pronosis 2016)

At the same time, reorganisation measures must be initiated, such as negotiating deferrals, drawing up restructuring plans, making efforts to obtain equity or debt capital and drawing up an overall reorganisation concept. All this must be done within the statutory period of 60 days, or now 120 days.

The amendment to the law that has now been made has not changed or temporarily suspended this provision for Austrian companies. Responsible managing director/board members therefore face the dilemma that in the event of an imputed over-indebtedness of their company, they must continue to prepare a prognosis for the continuation of the company in order to be able to benefit from the deadline of § 69 para 2a IO (120 days), which they are currently not able to do in most cases.

There is also no culpable hesitation on the part of the managing director/management board if they have “carefully pursued the opening of reorganisation proceedings with their own management” (see § 69 Paragraph 2 IO). How this should be done in the current situation of Austrian companies remains unclear.

In any case, it is advisable to urgently contact the creditors in case of arithmetical over-indebtedness of the company in order to obtain possible deferrals. There may be some prospect of success with the tax authorities and the banks in this regard. In the case of suppliers and employees, this is unlikely to be achievable, or only with great difficulty, as they are also more or less severely affected by the present crisis.

Social security contributions are to be deferred without interest on arrears for the contribution periods February, March and April 2020 by the provision of § 733 ASVG, which was also newly introduced with the 2nd COVID-19 Act “for companies subject to a ban on entry” and “companies affected by operating restrictions or closures […] for the contribution periods February, March and April 2020”. No separate application or negotiation with the social insurance agency is required. For all other companies, there is an optional provision according to which these contributions can be deferred if “it is shown to be credible that these contributions cannot be paid due to the coronavirus pandemic for reasons of company liquidity”.

In addition, “in the calendar months of March, April and May 2020, no insolvency applications are to be filed under the Insolvency Act (§ 65) because of the non-payment of contributions already due”.

In summary, the amendment to the law that has been made does not actually offer what it promises, as it does not even temporarily exempt the managing director/board of directors of a company threatened with insolvency from the obligation to file an application under § 69 IO. It would have made more sense to postpone the start of the running of the deadline to a later date, e.g. by suspending the 60- or 120-day deadline until a certain date.

A responsible and liability-avoiding managing director/board member of a company, which has got into difficulties due to the current exceptional situation, can only be strongly advised to take the following steps and measures despite the extension of the deadline for filing an application in the Insolvency Code:

The preparation of a prognosis for the continued existence of most companies can be started at the moment but probably not yet completed in a meaningful way.

If the obligation to file an application for the opening of insolvency proceedings is violated, the managing director is liable to the creditors for the damage they suffer from the fact that if the insolvency proceedings had been opened in time, the quota to be achieved would have been correspondingly higher (old creditors) or would not have entered into business contact with the insolvent company in the first place (damage to the confidence of new creditors). The burden of proof that the damage would also have occurred if the managing director had acted in accordance with their duties lies with the managing director (reversal of the burden of proof!).


If you would like to receive future issues of need2know follow us on LinkedIn or please send an email to subscribe@bpv-huegel.com. 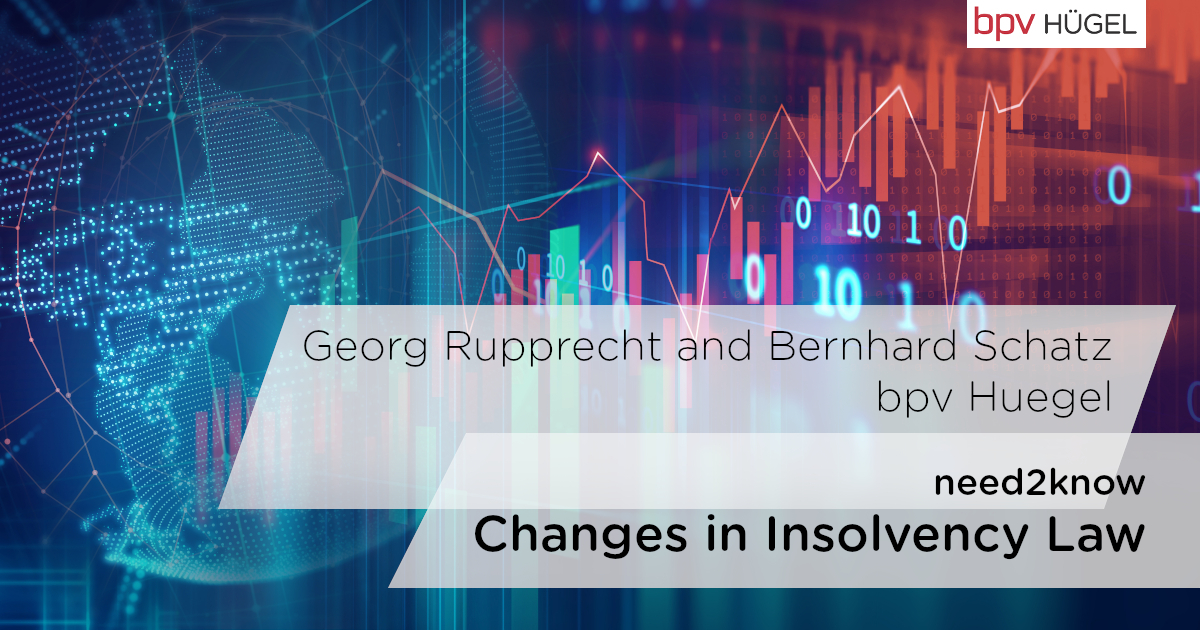