The coronavirus poses great challenges for companies. Increasingly, entrepreneurs will no longer be able to fulfil their contracts (on time). The following is an overview of the legal consequences of the problems involved in the provision of services.

No (timely) provision of the agreed service

There can be many reasons why an entrepreneur can no longer meet his delivery obligations on time: Official closures of business premises, sickness absence of employees or problems upstream of the service chain that affect the company’s own service provision.

If the contracting parties cannot (amicably) agree on a later provision of services, the creditor can generally withdraw from the contract by setting a reasonable grace period.

The situation is different if it is a so-called fixed-date transaction, i.e. a transaction in which the creditor declares his withdrawal from the contract already at the time of its conclusion in case of delay. The same applies if the nature of the contract or the purpose of the performance known to the obligor indicates that the creditor has no interest in late performance. In the case of a transaction for delivery by a fixed date, the contract shall be dissolved with immediate effect and the requirement of a declaration of rescission together with the setting of a grace period shall no longer apply. However, the contract remains in force if the creditor informs his contractual partner immediately that he continues to insist on performance.

The same legal consequences apply, if performance becomes impossible after conclusion of the contract but before fulfilment. Examples of such impossibility are the cancellation of major events such as football matches or concerts due to an official prohibition. Here, too, the contract is dissolved and the debtor is not obliged to perform. At the same time, however, the obligation to pay for the customer is also cancelled.

However, it should always be noted that a case of force majeure that excludes fault only exists if (i) the occurrence of the COVID-19 crisis has actually prevented or delayed the performance of the service in the specific case to be assessed and (ii) the debtor could not have prevented the occurrence of the event. Especially on the basis of the second mentioned circumstance, the counter argument can be made that a carefully acting businessman must take all reasonable measures to prevent the occurrence of this event (i.e. the “corona-conditioned” late or non-performance).

Regardless of the reason for the delay, entrepreneurs are advised to inform the creditor as soon as possible about the (imminent) late or non-performance, as otherwise they run the risk of being sued for breach of their duty to warn.

Lapse of the customer’s interest in the performance

The COVID-19 crisis can affect not only the debtor’s ability to perform, but also the creditor’s – i.e. the buyer of a service – willingness to accept it. Thus it can happen that a customer wants to withdraw from the contract because he is no longer interested in the performance and will invoke the so-called “doctrine of frustration” (Wegfall der Geschäftsgrundlage). The basis of the contract is no longer valid if there is such a fundamental change which was not foreseeable when the contract was entered into that the debtor can no longer be expected to maintain the contract. However, only those cases are relevant which concern a change of circumstances which everyone associates with the conclusion of such a transaction and which were not foreseeable at the time of the conclusion of the contract. An example of this is the withdrawal from a contract for a package tour to a country with an upright Corona travel warning. In this case, the basis of the transaction would be assumed to have ceased to exist, so that the contract would be cancelled.

Relevance of the specific contractual agreements

The explanations presented here merely summarise the basic legal model. In business transactions between entrepreneurs, however, it is permissible and customary in practice to conclude agreements deviating from this basic model. Should one of the above-mentioned cases be relevant for your company, it is therefore imperative to review the individual contractual provisions in addition to the basic legal model. These can be found in principle, unless they are regulated in the contract concluded for the individual case, in any framework agreements or in the general terms and conditions (“GTC”).

Please note that the information provided here does not replace legal advice. The regulations presented here can be changed by the legislator at short notice. We therefore invite you to visit our information area on a regular basis.

If you want to receive future issues of need2know, follow us on LinkedIn or send an e-mail to subscribe@bpv-huegel.com 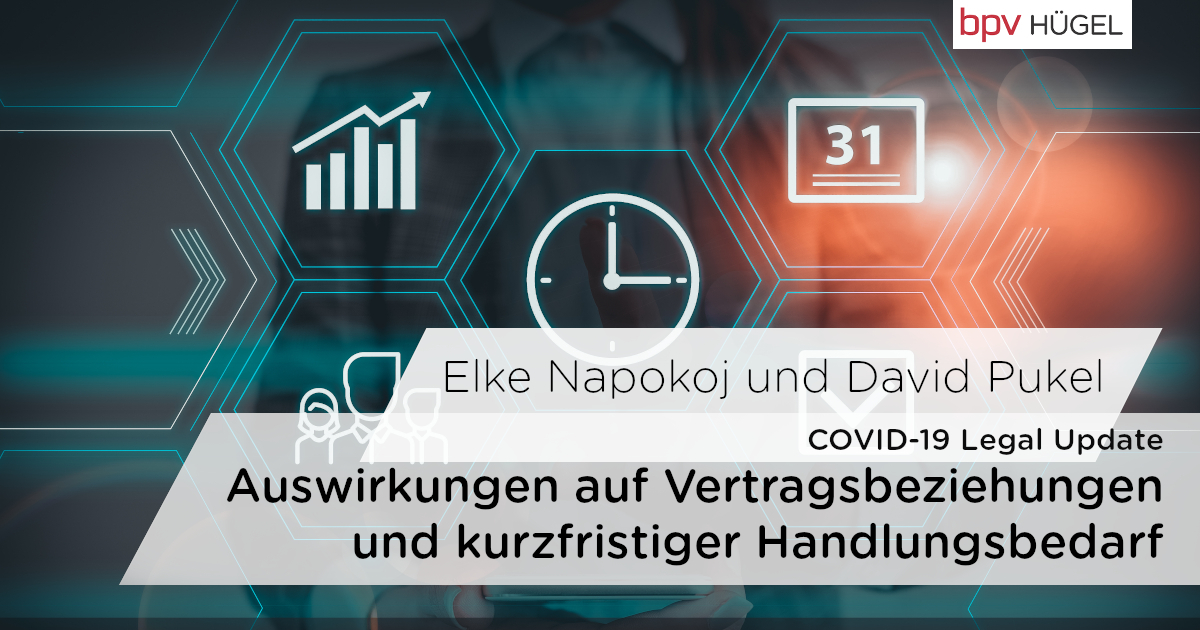